We are thrilled to have Dan sharing in ministry with us and look forward to getting to know him.  He is currently on study leave to complete his MA and begins in earnest towards the end of August.

Below he has shared a few words to help us get to know him. 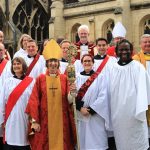 Dan is 49 years old, the son of an army officer, born in Hampshire, he moved around a lot living in Hong Kong, Germany, Northern Ireland and England.

He went to boarding school from an early age (London and Dorset).  He did a degree in Public Administration at De Montfort University and then worked in London in the City for several years as a Benefits Administrator and then Assistant Company Secretary.

During this time, he became a Christian, attended Holy Trinity Brompton in London and then after five years went to Africa to join a hospital ship to work with discipleship schools.

From there he was invited by Trinity Cheltenham to set up a discipleship school in Cheltenham and be an Associate Minister, which he did for five years before heading off to Afghanistan as a mission partner and setting up a charity to help the poor and vulnerable.

Nine years later he returned to England to take on a role as Associate Minister at Mariners Church (Gloucester) for two years before beginning training for ordination at Trinity College Bristol where he studied for an MA in Theology, Ministry and Mission.